Each week, a different member of the Skiddle team picks a record for the rest of the team to listen to and evaluate, ranking the album out of 10. Where will this weeks record land on the leaderboard?

Welcome to week ten of the Skiddle Record Club - a place for the people behind the scenes at Skiddle to share the music they love, firstly with their colleagues and then with you, the reader.

Last week, Tom from Account Support brought Sleep Token - Sundowning to the Record Club, and though it didn't win fans in all corners of Skiddle, it managed to take 6th place on our leaderboard, just behind Daft Punk, pushing Swans to 7th position. Sleep Token was an interesting one that was very divisive for our listeners. The moshers of the group wanted more METAL than was on offer, while others enjoyed the poppy elements and the balance between the two: "Brilliantly atmospheric. I liked how tracks often started with lovely reverb-y vocals paired nicely with calm piano/guitar to then finish on something more powerful." However, others were put off by the singers' affected vocal style, highly reminiscent of chart-pop acts: "The vocals make me feel really queezy. It's like Bastille, except they have "heavy" bits," viewing the "heavy" elements as some kind of novelty. It did earn a high re-listen score, however! 70% of our listeners would listen again. One even gave it a 4.5/5! That's our joint highest individual score yet! Read all about the album that had one listener saying "The band have a confusing sound as it sounds like rock in some parts but then gets very poppy and sounded like a different band!" HERE!

So, Kendrick Lamar remains atop our leaderboard for another week. Going off the scores, it's going to take something very special to dethrone in. How about one of the greatest pop records of all time? Okay then... Kate Bush is a British singer/songwriter/producer/pop-queen whose career began at the tender age of 16 when Pink Floyd guitarist/prog-wizard David Gilmour was handed a demo tape. He was amazed at the songwriting ability of young Kate, who had apparently amassed over 50 demos at this time, but what astounded him more was the banshee-like vocals on offer. Kate sang in a register not often heard in pop music, as evidenced on her debut single 'Wuthering Heights', in which she regales the story of Kathy returning home. Her voice is shrouded in dream-like wonder and fairy-tale-esque merriment. Though this was bewildering to a lot of people in 1978, it quickly established Kate as an artist of remarkable talent and mystery. It didn't take long for Kate to take the reins of her own artistic development, as, by the time she reached her third album, Kate was already assuming the role of producer.

Kates' fourth album, 'The Dreaming', saw her at her most experimental, and though, in hindsight, this album pushed the boundaries of pop music and spawned some of the greatest music of Kates' career (in my opinion, of course; go and listen to Night of the Swallow. It's sublime), it confused critics and fans alike, who received the album in a very mixed manner. It would take Kate 3 years to follow up 'The Dreaming', as she locked herself in the barn behind her house where she conjured up what can only be described as audible magic. Said magic was finally released in 1985. 'Hounds Of Love' was the outcome of these sessions. The album was critically acclaimed and is often referred to, to this day, as one of the greatest albums in modern music. Following the luke-warm reception to some of the jovial qualities of her previous record, Kate opted to give this record and deeper and darker edge, starting with the progressive behemoth 'Running Up That Hill', a song that remains relevant in its sound and lyrical content even today, in 2022. The first half of the album features huge pop hits, while the latter half, subtitled 'The Ninth Wave' is a concept suite of songs, telling the story of a woman lost at sea as she hallucinates, dreams, and is, eventually, rescued. It was a brave choice to attempt something so artistic and experimental on a mainstream pop record, but it further solidified Kate Bush as one of the UK's finest musicians. Granted, this is one of my personal favourite albums of all time, so I'm probably slightly biased.

"It’s one of the first albums I ever listened to and I thought her voice was captivating," says Clare, who clearly has deep-rooted nostalgia for this album. "She is so ahead of her time as her lyrics are more relevant now than they were then." I couldn't agree more, Clare! But is the rest of the record club as enamored as we are?

So, what does the rest of the Skiddle team think?

When asked if participants would listen again, 87.5% said yes, while only 12.5% said no. But why is this the case?

Similar to what happened with Kendrick a couple of weeks ago, there really are very few negative comments from our listeners. The lowest individual we received was a 2.5/5, so what did this listen have to say in their defense of this score? "This one definitely won me over more as it went along, admittedly I did get a bit bored at the start. Perhaps if the avant-garde aspects made their way in a bit sooner it could've reeled me in earlier." It looks like this listener was looking for the more experimental side of Kate, which certainly emerges as the album enters its second act. "It's definitely one of those where the score is torn between appreciating the composition and how much I actually enjoyed listening to it. It's a great album I just don't think this one's entirely for me."

Our next lowest score was a 3.5/5, with the reason being: "She's a bit whiny I reckon. Some of the tracks were a bit intense and she needs to cheer up a bit," so clearly, Kates attempt to take things a little more serious on this record didn't wash with this listener. Another listener found the album a little too theatrical, in places, it would seem: "I did struggle a bit through a couple of the middle tracks as it goes a bit Phantom of the Opera/interpretive dance/movie soundtrack. It's no bad thing, it's quite Bowie really but was a bit hard to concentrate on work whilst listening to something like Waking the Witch."

It would be remiss to not mention those who had nothing bad to say. When presented with the question "What didn't you like about the album", one listener said, "There is not a single thing about this album I don't like." Yes, that might have been me that said that... But it was certainly echoed by another listener who responded "Nothing. Kate is Queen." I concur.

"Jig of Life makes me want to do the complete opposite."

"It's a great album I just don't think this one's entirely for me."

"The only downside to this album is that I don't have the lyrics in front of me so I can fully understand the enigmatic lyrics that are spouted throughout the album."

"I can't fault this record but because I'm a little freak, I prefer the Futureheads version of the single ''Hounds of Love'' but that's because I used to wear pointy shoes as a teenager."

So, with a score of 4.1, and a relisten score of 87.5%, what did our listeners like about the album? "I've not much to say other than this is essentially a perfect album. It's strange and challenging in places, but with enormous, crowd pleasing hits in there as well, all held together by Kate's singular, stunning vocals and unpredictable songwriting," says one listener. They go on to say "the bold, bold choice to go into the heavier second side too, creating like two albums in one is a stroke of genius. I can't praise the album enough." It goes without saying, this one was a 5/5 review, which, by the way, is the first we've seen in the Record Club so far.

However, our above Kate lover wasn't the only to give it a perfect score. This album received THREE 5/5 reviews from our listeners: "This might be the most perfect pop album of all time, in my opinion. The Ninth Wave, is one of the greatest collections of songs of all time. I had to stop listening to it in public places because it reduces me to tears every time." And if that wasn't enough praise, our other perfect scorer said: "Hounds of Love is a perfect blend of theatre and music. Huge cinematic themes running all the way through, sitting side by side with beautiful, weightless vocals, thunderous basslines, synths and drums. Nods to post-punk, new-wave and all my favourite things in the world make this record an all-time favourite." Safe to say there are some pretty big Kate Bush fans at Skiddle.

Elsewhere, the comments were also incredibly positive: "the more you hear it, the more you come to appreciate it. I now know the album to be deeply nostalgic after 5 ish listens and will 100% be returning to it in the future. Her voice is epic." Epic, indeed. Another discussed the legacy this album has had on popular music since its release:  You can hear the influence that Kate Bush has had on musicians down the line - like Feist, St Vincent, Patrick Wolf, Florence & The Machine, Lorde etc. She was totally out there with some of her ideas but she knew what she wanted."

"It does well to theatrically present itself when sometimes there's actually quite little going on."

"While it moves between and hints at loads of different styles/genres, I think the album has its own sound and is effective as a complete product."

"She tells brilliant stories in her music and I can see how people can get lost in the tracks."

"Kate Bush is my dads all time crush. He even claimed he would leave my mum for some bush action if the opportunity arrived so this was a good opportunity to give the whole album a listen and see what Audrey is up against."

"Running Up That Hill is surely in the conversation for greatest album opener. It is an absolute masterpiece of prog-pop execution." 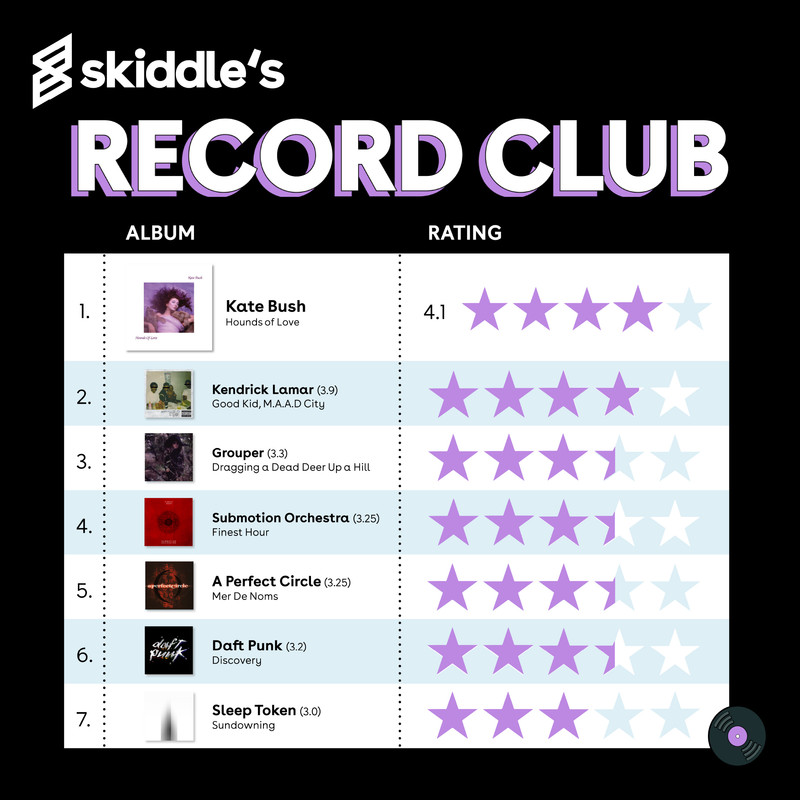 After only 2 weeks atop the board, Kendrick drops to second, as Queen Kate takes the top spot with 4.1/5! Not only is this our first record to get over 4 stars, it's also almost the exact same score as can be found on Rate Your Music! Personally, I am very happy to see Kate in first place, even if it does mean my pick, Swans has disappeared off the bottom of the board. I very nearly selected Hounds of Love myself, so kudos, Clare on such an excellent choice!

Next week's record choice comes courtesy of Ellie from our Customer Support team!

Discover even more tours and one-off live shows happening where are you by heading over to our Gigs page! Just click or tap - here

The Skiddle Gig List: Upcoming gigs and tours across the UK