On the eve of the release of Shame's highly-anticipated second LP - 'Drunk Tank Pink', we spoke to guitarist Eddie Green about the making of the overdue record, touring in a post-Brexit Europe and Shame super fan - Mel B

It would be more than fair to say that Shame's recently released second album - 'Drunk Tank Pink', has been a long time coming. The highly-anticipated follow up to 2018's critically acclaimed debut - 'Songs Of Praise', has created quite the buzz amongst fans and critics of the alternative music scene. And for good reason.

Released 12 months later than originally planned, the post-punk quintet's sophomore record is an anxious and visceral account of a maturing band, struggling to adjust to life when the music stops.

After spending most of their young adult lives on the road, performing to hundreds of thousands of fans across the world in support of their remarkable first album, the South London group eventually found themselves without a schedule of live dates to perform upon.

Back home, disorientated and wrestling with this new and unfamiliar existence, each member of the group began to deconstruct their own approach to creating music. Utilising their individual mediums to cathartically express feelings of isolation, uncertainty and anxiety, 'Drunk Tank Pink' is, coincidentally, a perfectly timed musical accompaniment to these strange and dystopian times we all find ourselves living through.

An accomplished and thought provoking 11-track offering that, as far as we're concerned, was most certainly worth the wait.

Guitarist of the band, Eddie Green recently took the time to chat with us about the bands adventurous new record, talking us through the writing process and what it was like working with renowned producer James Ford. We also got the chance to ask him for his thoughts on touring in a post-Brexit world, and unearthed Mel B of the Spice Girls, surprising love for Shame. Who knew?

Hi Eddie, how are you holding up? Where do you find yourself speaking to us from?

Eddie Green: "Howdy. I’m locked down here at my girlfriend’s house in North London, trying to keep myself busy. Just made soup. Might look at the piano later."

Let’s get straight into it… 2020. What a year. Especially for all involved in music. How have you collectively coped since last March?

EG: "Unsurprisingly, it’s been an immensely frustrating year of perpetually putting plans on ice, dealing with disappointments, setbacks and financial struggle. On the face of it, I guess we’ve just tried to carry on, preparing for things as if to assume they are still going ahead, and continuing to rehearse and write together, restriction-permitting. I think it’s been good for us mentally to carry on in this way."

Have you found that the bands creativity has been hampered throughout lockdown or has it been an inspiring and productive time?

EG: "I definitely wouldn’t say it’s been a particularly inspiring time, and there have definitely been moments where our collective creativity feels like it’s faltered, but that doesn’t mean to say it was entirely detrimental. It has varied week by week, much like the situation itself. I think we’re just trying to allow ourselves time at the moment, without putting too much pressure on ourselves." 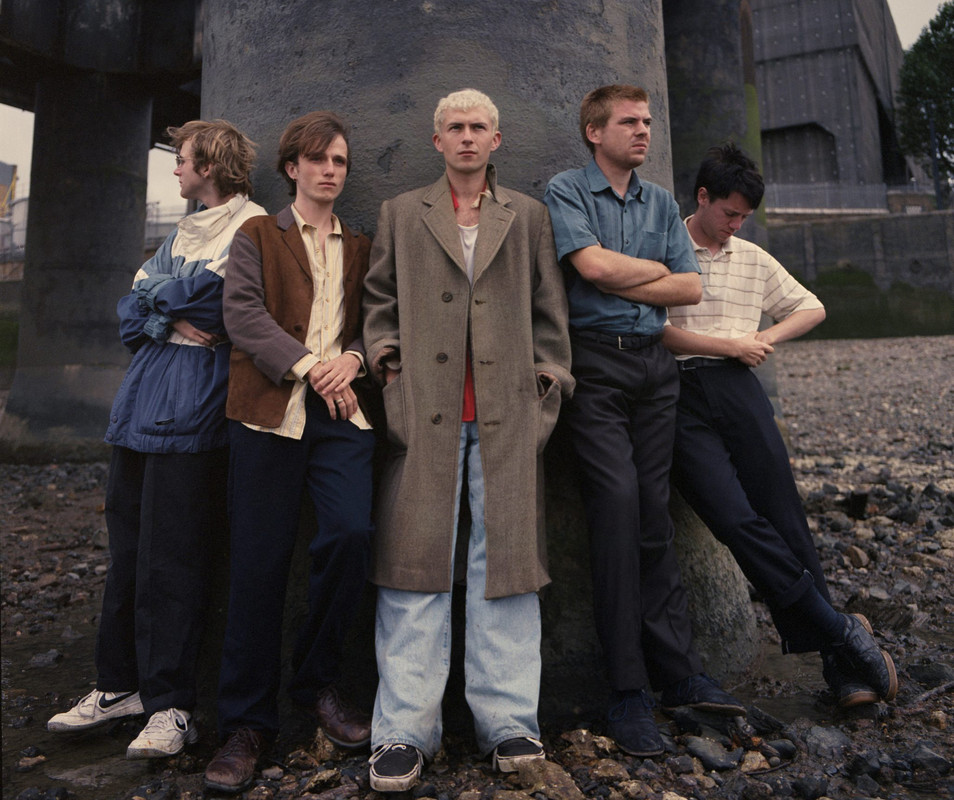 Drunk Tank Pink is due out this week. It’s been a long time coming and the singles are sounding huge. The music and musicianship seems to be much more considered and accomplished on this record. How did you go about writing the album and how has the process differed from writing your debut – ‘Songs of Praise’?

EG: "The process of creating this album was pretty different to how we did Songs of Praise. This time around, we began with a trip to a studio at Dewar Farm in the Scottish Borders, where we spent 2 weeks writing. We then brought a handful of those ideas back to London where we then created the demos in Josh’s bedroom. This approach allowed us to be a bit more thoughtful about what we were doing, and also enabled us to look at things from a more production-driven perspective."

Lyrically, the new record, rather fittingly, seems to deal with themes of isolation and silence. How has the absence of live music and the social element of performing live and meeting your fans affected you personally, and as a band?

EG: "It has definitely created a huge feeling of distance between ourselves and that side of our lives. It’s truly bizarre to have been bereft of that connection with the people who listen to our music and come to our shows, particularly poignant because its impossible to recreate."

You recorded Drunk Tank Pink with producer James Ford (Foals, Arctic Monkeys) at what sounds like an idyllic chateau/studio in Paris. How did you find the experience? And what was it like producing an album with Ford?

EG: "The experience at La Frette studios was really incredible and one that I feel privileged to have been able to have. Everything was pretty much perfect and we were treated like royalty. Working with James was particularly fun, we get on with him really well and it felt like he became a member of Shame for the 3 weeks that we were there. With James, I was more than happy to allow myself to be 'produced' if you know what I mean."

Your music video game has, like the music, remained strong for album two, with an artistic feature for each of the singles from the new album, already out there for consumption. How did you develop ideas for these videos?

EG: "For us, videos have always been a hugely important part of things so we always try to make sure they’re as good as they can be. The ideas just came from speaking to a wide range of people and our friends. We collated and produced the different ideas that were presented to us."

Check out the official video for Shame's 'Nigel Hitter' below...

Talking of first-rate video content, we’ve been tuning in to Shamestation since its launch last May. We’re admirers of the next level editing and the high calibre of guests you've played host to. One of our favourite episodes has to be episode 003, featuring Mel B of the Spice Girls. How did you manage to get the Scariest of all the spices involved?

EG: "Scary Spice is actually a huge Shame fan, she comes to all our gigs. We offered her the chance to join us on Shamestation and needless to say, she jumped at it."

Have you got any other A-list names lined up to participate in the series, that you can exclusively reveal to Skiddle?

EG: "That’s part of the magic of shamestation, you never know who’s up next."

You’ve recently announced that you will be heading out to Europe in October for a run of dates, despite the best efforts of the self-sabotaging British government to halt overseas touring. What do you predict for the future of the touring industry, both here in the UK and in Europe, and will you be looking to tour the continent again in years to come?

EG: "Regardless of what can only be described as the UK’s political suicide, we will always endeavour to tour Europe. As a band who still very much identify as European, it’s hugely important to us."

"Unfortunately, I think that touring Europe is set to become a bit more of an ordeal, particularly for up and coming artists with little or no financial backing. I think it’s important to consider that most small/medium sized tours already run at a loss, without the bullshit customs requirements that are now in place. I hope it doesn’t discourage bands from exploring the continent."

Final two-part question… Do you have any parting words of wisdom you’d like bestow on our readers? And can you recommend any artists or records that you think people should be taking note of in 2021?

"Check out New Dad from Galway. Their self-produced debut single 'Blue' is amazing. I think they’re gonna be big."

Who are Fontaines D.C.?