Skiddle attended Manchester's Castlefield Bowl last night to catch one of the best live acts in the business - Foals. Continue reading to hear our thoughts on the night's proceedings

“I feel like we’ve missed each other - us and you. Manchester are you up for it?” was the question posed by Yannis Philippakis to the adoring Manc faithful mid-set. We think it's safe to say that we definitely were. Coming off the back of their outstanding headline performance on the Other Stage at Glastonbury, and it being three years since Foals last graced a Manchester stage, it was clear that the band felt they had some making up to do. We couldn’t think of anywhere better for them to do so than a sold-out Castlefield Bowl.

There's always a special presence that emanates around the train track towered amphitheatre of Castlefield, and last night was no exception. Whether you were crammed into the pit-filled front, sat on the rear steps, or you were one of the lucky buggers in the apartment buildings, you just got a distinct feeling that things were about to… well, royally go off!

Despite a different start to the gig than everyone was expecting, due to a couple of Covid-related absences from original supports Wet Leg and The Regrettes, last-minute step-ins Yard Act were a seamless replacement.

There's a certain swagger that exudes from Yard Act frontman James Smith, and, as they rifled through their unique brand of spoken word punk, they quickly got the crowd onside. I'm sure many left the gig with some new tracks to add to the playlist.

But, when Foals got on stage, it was a rip-roaring, energetic set that thrashed through their seven albums and descended a crowd of seasoned moshers into jubilant chaos. 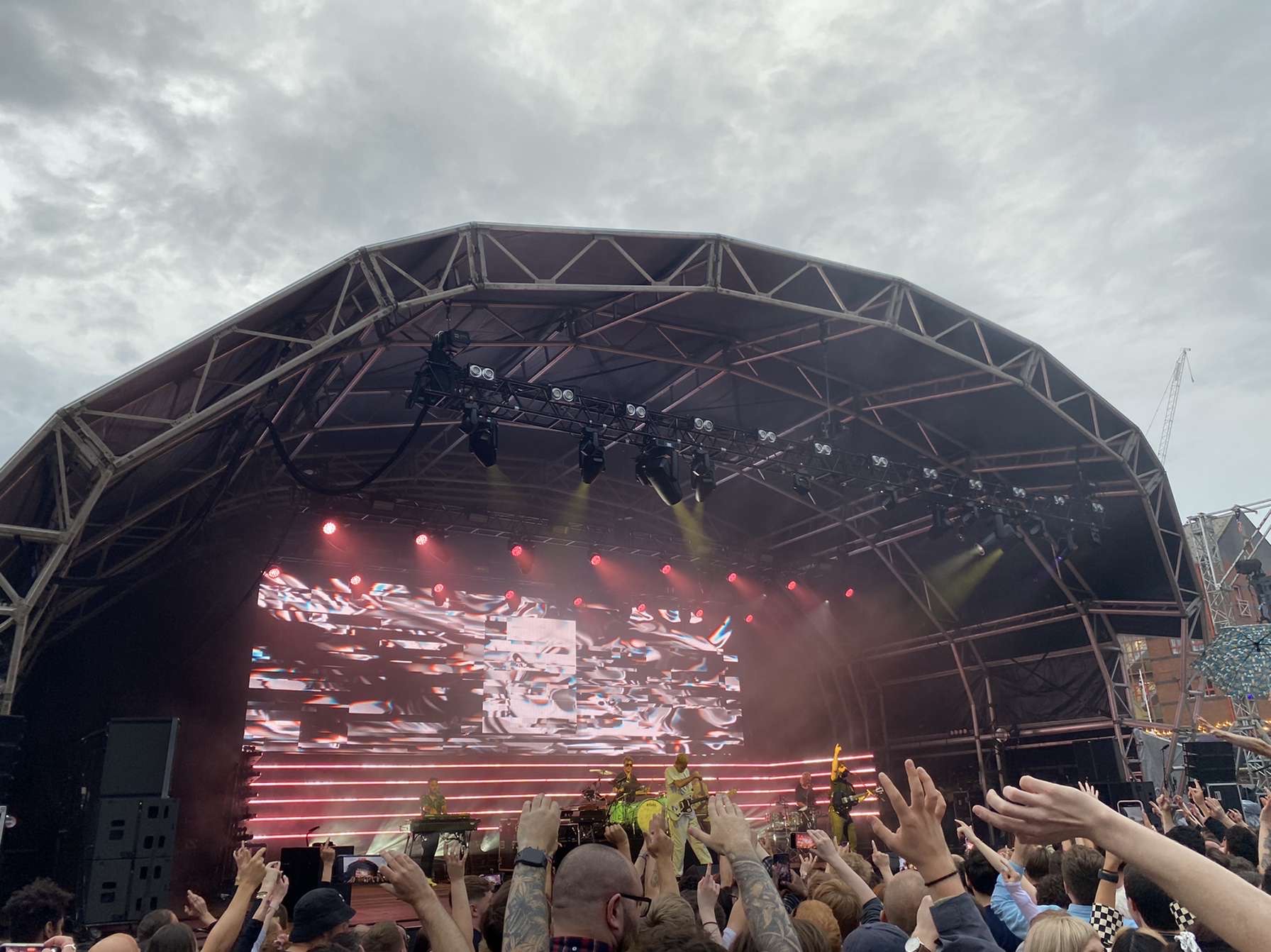 It was clear from the first chord of funk-fuelled opener ‘Wake Me Up’ that the Oxford Rockers didn't come to play around. With its choppy guitars and sparkling backing keys, its dance-pop vibe permeated a groove through the crowd and showcased the adaptability of the modern indie icons.

Their new album ‘Life Is Yours’ will certainly be a soundtrack to many this summer, and with superb singalong ‘2am’, hip-shaking ‘2001,’ and titular ‘Life Is Yours’ permeating the first half of the set, the summery, keyboard infused funk of the album shone through and the tracks felt at home amidst the classics.

Between new tracks, the Manc crowd were treated with a mix of old and new. The stomping ‘Mountain at my Gates’ was gifted to the crowd right off the bat, whilst the agile glisten of Antidotes’ ‘Olympic Airways’ took fans back to the math-rock days, and fan favourite ‘My Number’ did exactly what you’d expect it to. Pure unbridled joy beamed from everyone in the bowl.

As the night continued Yannis and Co hit into indie dancefloor filler ‘In Degrees’ which sent a groove field bolt through the crowd who erupted into a proper boogie, the instrumental outro to the track turning into an all-out party that wouldn't go amiss on a beach in Ibiza.

There's never any filler in a Foals set. It’s a true testament to the back catalogue when every word of every song is being screamed back at them, with the energy the Oxford boys bring to a stage, the pace is ferocious, and whether its a dance anthem or a riffed-up beast the crowd more than match what they see on stage.

The only breathing room comes when they launch into the atmospheric epic that is ‘Spanish Sahara.’ Dedicated to Yard Act making the last-minute call-up, the track's gradual cinematic build is a microcosm for a set that has been building in the same manner, from the track's graceful chord to its raucous last, it was the tipping point before the chaos ensued.

‘Providence’ sent beers and bodies alike flying across the cobbled bowl. Its incredibly extended outro left more than a few with memorable bruises. It felt as if it was never going to stop and the energy was carried over into the initial sweat-soaked set-closer, 'Inhaler.'

Yannis was on top form as the set descended into reverb, throwing himself around the stage, on top of the speaker (giving a wave to a passing train whilst up there), and then in his signature manner, he hopped the barriers and was rocking with the lucky few at the front.

With the encore giving everyone a breather and a regroup, it wasn't long before such things felt a bit meaningless. The band were soon back on stage, launching straight into the abrasive rock anthem ‘Black Bull, followed by ‘What Went Down’, a song that arguably sees Foals at their heaviest, with those in the crowd separating into the biggest pits of the night.

The effervescence tingled, and the love pouring out of everyone in Castlefield bowl was evident. It was one of those nights that gave credence to the power of live music.

Such a feeling was reciprocated by the band, who wholeheartedly thanked everyone for coming before ending proceedings with one final romp, the heavy groove of ‘Two Steps Twice’, bringing the set full circle and the sensational night to a close.

What a band… Foals Forever x

Live Review: Delights live at The Deaf Institute in Manchester