Ahead of a run of shows across the UK this year, we take a quick moment to shine the spotlight on the illustrious indie icon, uncovering his past achievements and fascinating back story. Continue reading to learn more

The familiar frontman of one of the 90s most influential bands, with his shoulder-length hair, sculpted cheekbones and infamous swagger, Richard Ashcroft is a man, nay, a myth, a legend who should need little introduction to music fans.

Hailing from the North West of England, a proud Wiganer through and through, the towering musical icon made his first real impression on audiences back in 1997, appearing in a certain music video of a definitive indie-rock record. Dressed in a dark oversized leather coat with baggy black pants and his customary shaggy barnet, Ashcroft marched down our screens, along a busy walkway on Hoxton Street, East London, barging his way to his destination to the sound of what would become one of the biggest anthems of the era. The Verve’s biggest single - 'Bitter Sweet Symphony'.

Taken from the band's third studio album, the Mercury Prize nominated LP, Urban Hymns, the record and its video became a phenomenon of UK music culture, basically overnight. Previous albums, A Storm in Heaven and A Northern Soul had assisted the group in gaining some traction amongst fans in the north, as well as amongst industry heads at Virgin Records who clearly saw potential, but the band's brilliance wasn’t truly understood until the release of the band's seminal record.

Selling over ten million copies worldwide, Urban Hymns is still the seventeenth best selling album ever in the UK and, at the time, shot the group to super stardom, with huge tours following on continents around the world. Sadly however, the longevity of the band was shortly after brought into question. A lawsuit stating the illegal use of a loop found on the symphonic version of the Rolling Stones' ‘The Last Time’, also found on The Verve's ‘Bitter Sweet Symphony’, was issued to the group. The Verve would lose the court battle and we’re forced to hand over all profits made from the song. Tensions ran high between the group and with Ashcroft’s heart no longer in the project, he broke away from the band just two years later in 1999, to pursue his own solo career.

Straight out of the gate, not twelve months after announcing his break from The Verve, Ashcroft returned with a brand new eleven-track album, Alone With Everybody. The album featured some of his most recognisable works to date, including his first ever solo single, ‘A Song For Lovers’, a track apparently inspired by a listening of Joy Division's, ‘Love Will Tear Us Apart’, whilst held up in a squalid hotel room with his wife late one night.

This album and the six others that followed helped to cement the singer-songwriter as one of the greatest of all time, with high praise coming from some of the most respected names in rock n roll over the years. It’s said that Noel Gallagher even dedicated the Oasis track, ‘Cast No Shadow’ to the now fifty-year-old artist.

Fast forward to the present and Ashcroft is still at large, releasing new records, collaborating with big names and performing in front of scores of fans. He recently issued a reworking of The Verve’s Urban Hymns titled, Acoustic Hymns Vol. 1, with vocals on ‘C’mon People (We’re Making It Now)’ courtesy of Oasis frontman and brother to Noel, Liam Gallagher. A beautifully arranged long-player, breathing new life into some of both Ashcroft’s and The Verve’s most adored releases.

Join thousands of other festival revellers in front of Highest Point’s Main Stage on Thursday 12th May, and catch the indie maverick performing tracks from his latest LP live. Tickets are now on sale and can be purchased at the bottom of this page.

The Best Festivals in Lancashire

The Best Bands & DJs to Catch Live This Spring 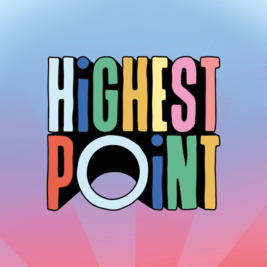 The Big Family Day Out returns to The Highest Point music festival in Williamson Park on Sunday 14th...