Lytham Festival has become Lancashire’s Largest and best Loved Live Music Festival, attracting people in their thousands from all over the UK to enjoy awesome nights of Live Music & Arts by the Seaside. The festival has broken the decade barrier and will be heading into 2022 propping up the 12th year!

From humble beginnings with One night on Lytham Green, featuring Lesley Garett and Alfie Boe on leafy Lytham Green in 2009. Fast forward to 2016 when the festival celebrated its best year to date with 70,000 festival-goers enjoying a myriad of live music and events over seven nights.

Under 16s must be accompanied by an adult aged 18 and over who has their own ticket. Children aged 2 and under can attend for free and don’t require a ticket. All other children must have a full price ticket to enter the concert.

If you're look for the Official Lytham Afterparties, click here for more information and tickets.

Our visitors have reviewed Lytham Festival 70 times. Read reviews of this festival »

Fri July 8 – The Strokes, with support from Fontaines DC

Where does Lytham Festival take place?

When is Lytham festival?

What are the timings of Lytham festival?

General Admission, The Lounge, The Garden and Accessible gates will open at 5pm. Showtimes are always subject to change however; we expect entertainment to start at 7pm and finish at 11pm.

How much are Lytham Festival tickets?

What happens If I bought a ticket and cannot attend?

Unfortunately, we can’t issue you with a refund if you can’t make the event due to work commitments or your mates have dropped out. In these circumstances, we advise passing on your tickets privately to avoid losing out on the money spent.

Refunds can only be offered if the event is cancelled or postponed, as agreed upon purchase.

Does Lytham Festival have any age restrictions?

Under 16s must be accompanied by an adult aged 18 and over who has their own ticket. Children aged 2 and under can attend for free and don’t require a ticket. All other children must have a full-price ticket to enter the festival.

Prams are not permitted into Lytham Festival.

Can I bring my own food and drink into Lytham Festival?

You are not allowed to bring your own food and drink into Lytham Festival. There will be a wide variety of food and drink stalls inside the festival, serving up organic, vegetarian and vegan options.

We want Lytham Festival to be an event accessible for all. The following tickets are available Wheelchair Platform, Ambulant, Hearing Impairment, Essential Companion.

Lytham Festival takes place on Lytham Green.  The site is a green field, therefore, is relatively flat but does have uneven terrain in parts. The ground may be muddy or dusty dependent on the weather conditions.

Smoke machines, strobe lights, fireworks and other effects may be in use at this event. Anyone affected by these should bear this in mind.

You are permitted to bring required medication into Lytham Festival. Please bring a copy of your prescription or a doctor’s note. Please make sure you only bring enough for the duration of the festival and ensure you keep it safe with you at all times.

Assistance dogs are permitted on site. If you require to bring a registered assistance dog, please contact hello@lythamfestival.com.

Please note that Lytham Festival accessible facilities cannot cater for people with temporary impairments such as broken bones, healing injuries and those who are pregnant. If you do have a temporary impairment, please be aware that there will be a lot of walking to get around the festival and not many places to sit.

More information will be available nearer the time including train and bus timetables. However, there will be more frequent busses which will run later during the festival.

Lytham Festival car parking is located directly next to the festival on Lytham Green. We would suggest pre-booking car parking to avoid disappointment as cars will be parked in arrival order. Please note cars are not permitted to stay overnight. 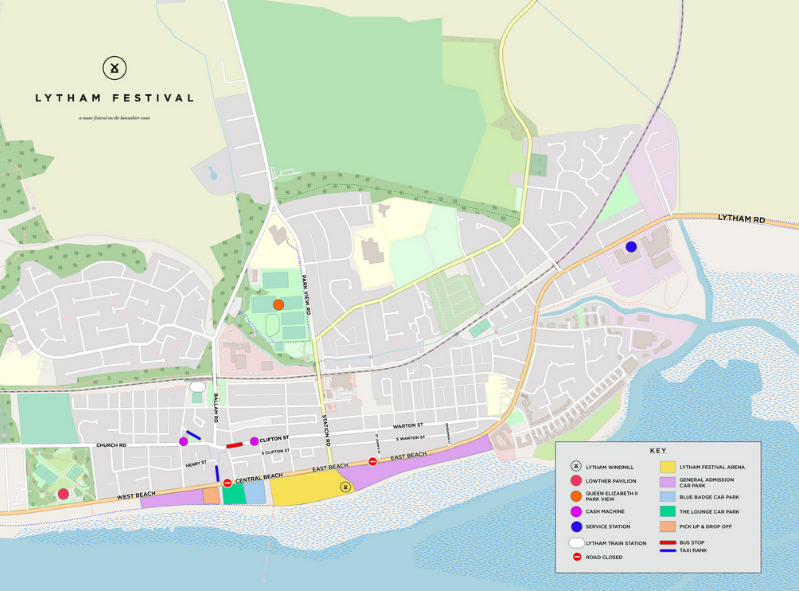 Map of Hotels near festival site

Try our fully interactive map of all nearby hotels and accommodation. Please check location and dates before booking.

The history of Lytham Festival

Daniel Cuffe and Peter Taylor came up with the idea of a one-night event to commemorate the 70th anniversary of the Battle of Britain. As they have recalled, it was just a “hobby” for them and the "chance to do something nice for the community". They certainly achieved that. Securing the Manchester Camerata and star soprano Lesley Garett, the first 2010 concert was a massive success, with 'sold out' signs being placed outside. It soon became clear that the people of the Fylde coast had a passion for the event, and local opinion was that it should be held annually, and provide something for everyone.

Things took off quickly. In 2011, Daniel and Peter and their new company, Cuffe & Taylor Event Management, added a third night to the event because of the huge demand for tickets. Rock legends Status Quo opened the event, golden-voiced Katherine Jenkins performed to another sell-out crowd and the finale of Boyzone cemented the event as Lancashire's largest outdoor musical festival. The following year the 2012 event was heralded as the biggest and best so far. A host of 80s stars took to the stage on the opening night for what ITV‘s Granada News reported as 'the biggest party the Fylde coast has ever seen'. This was followed on the second night by an advance sell-out of the 'Last Night of the Proms', featuring Alfie Boe with special guest Laura Wright. The finale of the 2012 festival featured famous X Factor finalist and now pop star Olly Murs, proving yet again that Lytham Proms Festival Weekend is one of the most diverse and interesting music events in the North of England. 2013 crowds flocked to opening night, 'The 80’s Strikes Back', with headliners Tony Hadley, Jason Donovan and Marc Almond. That was followed by Saturday night's spectacular, 'Last Night of the Proms' concert, headlined by international singing star Russell Watson.

Heading up the final, smash-hit Sunday night was Brit Award nominee and number one-selling artist Rita Ora, with special guests Conor Maynard and Stooshe. The Proms Festival continues to pull in the crowds - not just for the music and joy that it brings to audiences, the organisers believe in putting something back into the community. Since 2009 Lytham Proms has raised over £100,000 for local charities through fund-raising, charity auctions and special events, with 2012 contributing to Rock FM's 'Cash for Kids' campaign. 2013's event was also the greenest yet, thanks to a ground-breaking partnership with environmental charity Keep Britain Tidy. And so to this year and the latest chapter in the remarkable festival story. The fifth anniversary of the event was the biggest and best yet, with the ultimate fireworks display for the finale. Friday night saw the first edition of 80s Versus 90s, featuring back to back performances from Blue, Hue and Cry, Heather Small, Atomic Kitten and more! Tom Jones wowed 15,000 people, showing the people of Lytham why he's the Ultimate "Sex Bomb" and the passionate embrace of Michael Ball and Lesley Garrett immersed audiences in a classical extravaganza of songs from stage and screen.

Find similar festivals by exploring the categories and classifications below: