» Events » Events by artist » The Hara 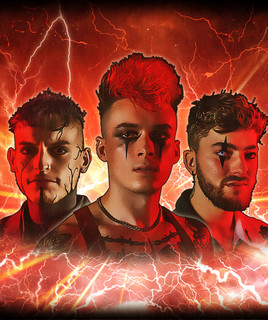 The Hara tickets and 2022 tour dates

THE HARA is Josh Taylor (frontman), Zack Breen (guitar) and Jack Kennedy (drums) from Manchester. Refusing to be pigeonholed, their ‘genre fluid’ music sees them continue to break new ground sonically and they have already found a home on Spotify, Apple Music and Amazon Music playlists. Featured across airwaves and column inches with notable acclaim from BBC Introducing, Amazing Radio, Kerrang! and Manchester Evening News, 2021 was an exceptionally successful summer as they debuted at festivals up and down the country starting with Download Festival before bookending the summer opening the main stage at Reading and Leeds. THE HARA also played triumphant shows at TRNSMT in Glasgow, Tramlines in Sheffield, Neighbourhood Weekender in Warrington, and Slam Dunk North and South.

“THE HARA have a secret, and the secret is their sound – it is untamed, unlimited.”– Manchester Evening News, Download Festival 2021

Explaining the band’s mantra, Josh elaborates, “We want to show everyone that despite it all, despite what the statistics say, despite what people say or any of that social media acceptance bullsh*t, it really doesn’t matter. Thousands of people reject you for being different but there are 10 times over that amount who will accept you and who are feeling just like you. If people can become a part of such a glorious resistance through our music, then that’s our mission”

Grit, energy, and a perceptive exploration of the chaos that surrounds THE HARA has fuelled their recent anthemic releases. The genre-defying trio’s EP ‘Play Dead’ was no exception. Music written for a live audience and festival stages is at the core of the EP’s soundscape, with tracks that inspire moshpit carnage in any crowd. Play Dead contains chart hitting singles Animals, Circus and Off the Edge with two fierce rock anthems, Bite Down and Until It Happens, the latter co-written with You Me At Six’s, Max Heyler. 2022 THE HARA are releasing their latest EP, WE ARE WERE BLACK which is being toured extensively around 17 cities, their largest tour to date.

Their stage presence is likened to that of legendary rock greats Queen, AC/DC and Guns N Roses with an amped up sound taking influences from likes of Bring Me The Horizon, Royal Blood, Arctic Monkeys, The 1975, Panic! At The Disco, Lower Than Atlantis, The Hunna, Nothing But Thieves, Muse, Twenty One Pilots, Don Broco, Idles, Yungblud and many more of their favourite artists; but it’s Josh’s stunning vocals, Zack’s gritty riffs and Jack’s punchy drum beats that ultimately define THE HARA.

The Hara has been mentioned in our news coverage

Below is a sample playlists for The Hara taken from spotify.